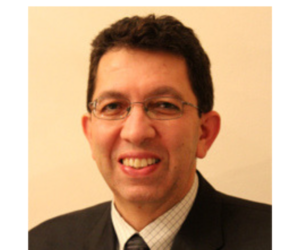 Marios Polycarpou is a Professor of Electrical and Computer Engineering and the Director of the KIOS Research Center for Intelligent Systems and Networks at the University of Cyprus. He received undergraduate degrees in Computer Science and in Electrical Engineering, both from Rice University, USA in 1987, and the M.S. and Ph.D. degrees in Electrical Engineering from the University of Southern California, in 1989 and 1992 respectively. His teaching and research interests are in intelligent systems and networks, adaptive and cooperative control systems, computational intelligence, fault diagnosis and distributed agents. Dr. Polycarpou has published more than 280 articles in refereed journals, edited books and refereed conference proceedings, and co-authored 7 books. He is also the holder of 6 patents. Prof. Polycarpou is a Fellow of IEEE and has served as the President of the IEEE Computational Intelligence Society (2012-13). He has served as the Editor-in-Chief of the IEEE Transactions on Neural Networks and Learning Systems between 2004-2010. He is the recipient of the IEEE Neural Networks Pioneer Award for 2016. Prof. Polycarpou has participated in more than 60 research projects/grants, funded by several agencies and industry in Europe and the United States, including the prestigious European Research Council (ERC) Advanced Grant.​

​He has been on the Advisory Board of the Center for Applied Neuroscience since April 2016.